Sales operations: What it is and how to implement it to drive growth 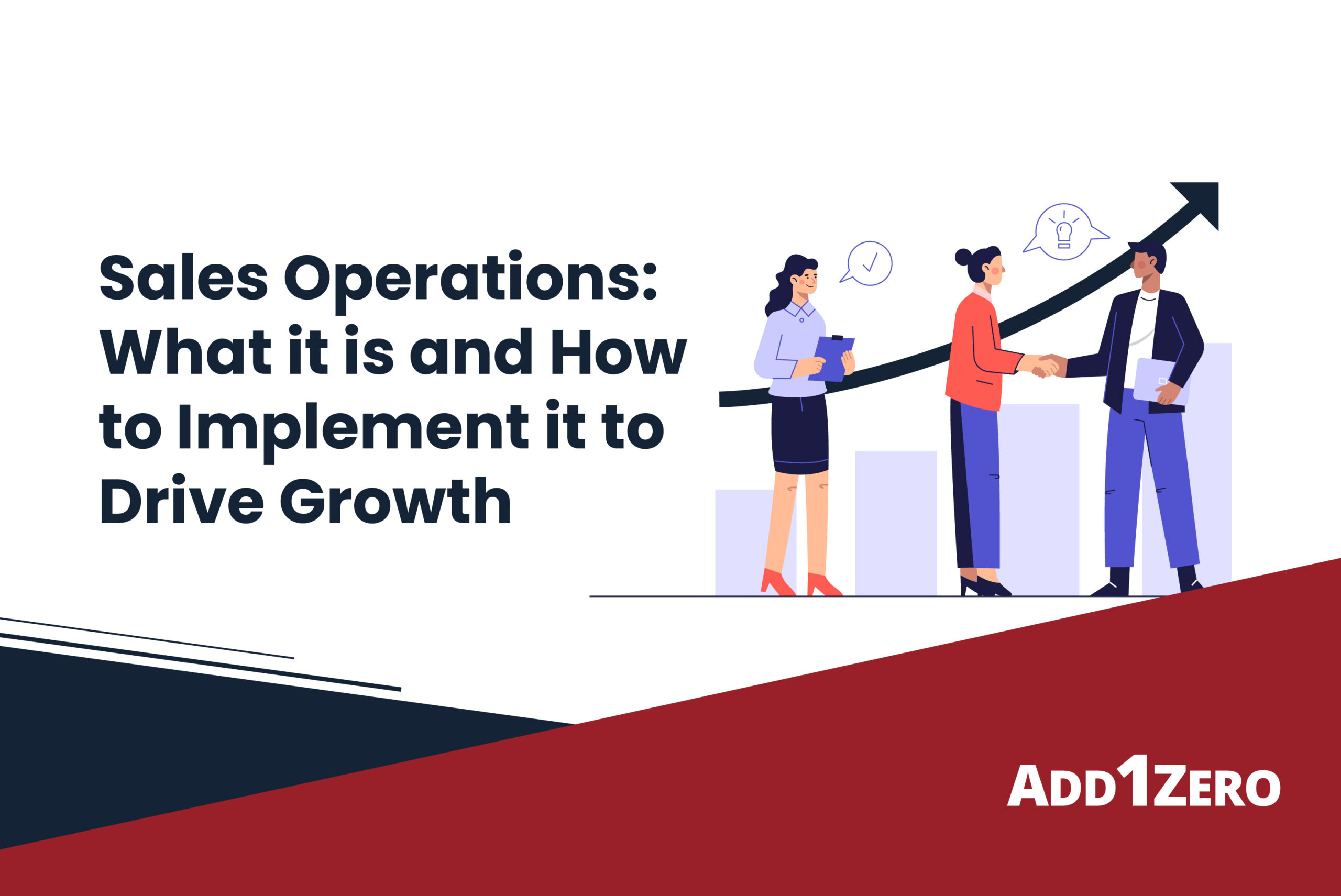 My theory after many startups is this:

No founder wakes up at three in the morning and thinks anything other than, “I need more sales,” because revenue is king.

All I want to do is close money for people, and we built a business around that. We invented a thing that I wanted, and it turned out to be valuable to other people. Thankfully I turned out to be right, but I also noticed some trends within services companies.

In a B2B services company, you’d have the founders who were really able to bootstrap and work sales up into the 6-figure mark, and they would always plateau. At that point, the founder would hit the same fork in the road that everybody else does when they make it this far. If you’re doing sales yourself as a founder, just be aware that you’re going to hit that roadblock where you will have to make a decision: Do you want to do sales all the time, or do you want to be an operator and run your business like a CEO?

Most founders want to be CEO and scale, which means they’ll have to exit that sales seat. That’s a very difficult thing to do, because most founders opt to hire a closer or a VP of sales. They lack the unique skills of the founder, such as all the tacit knowledge from the beginning of the business up to the 6-figure mark, and they can’t figure out how to scale past that mark. That’s exactly where we come in: making a scalable operation, beginning to close deals, and taking sales over.

A sales leader ought to be maximizing time on calls. What sorts of things need to happen on a sales leader’s end to turn a call into a signed contract?

The idea is to leave proposals, contracts, SOWs, emails, text messages, and so on to the sales op, because it’s very procedural. On the other hand, sales closers should be kept on calls as much as possible, so everything that doesn’t involve them being on a sales call is handled by sales ops. When you pair those two together, a closer with an ops person, those are the things that really get results.

With many of the companies we walk into, we’re the only sales folks. There’s an enormous amount of work that goes into a high-fidelity sales organization. Chances are, you’ve probably worked at a place where salespeople “sell whatever they want.” And when there’s a massive difference between sales and everything is a customized statement of work, you’re adding an outrageous amount of friction to the business, and friction is cost.

What we have found to be most effective is maximizing the number of calls we can do. After the initial call, we send a pre-call sequence of three emails that are designed to educate the lead prior to the call, which answer the major questions before they actually talk with us. That drives up the show rate. For our world, we’re the bottom half of the funnel: the meeting-to-close area, where we record every call that we do.

A sales call is a 1-to-1 discussion that we ought to be able to turn into a customer. Every time that prospect asks a question, it’s either a question about the features, benefits, or an objection. We have an analyst that goes through (literally) every recorded call.

Record every call, make sure all the right questions are being asked, make sure the objections are being handled properly, make sure that the proposal answers the particular needs of that customer, and make sure that what we’re proposing is accurate to the cost. If a sentence ends with a question mark, it gets logged into a database, reviewed, and normalized based on any other questions that were asked on any other calls. After a series of 50 calls, you start to get an idea of what people want to know when they show up for those sales calls.

Because a sales call is a 1-to-1 discussion, it’s very low leverage. We can educate somebody on that sales call, but what if, in the marketing, we could educate people relative to the things that they all want to know? We can decipher this now because we know what questions are being asked when people show up for calls, based on analysis. If we document and review those, we know exactly what people who show up want to know, and we can now feed that information back into the marketing side.

People want to show up to a call already knowing specific pieces of information. With marketing, you have the ability to have a 1000-to-1 (or many-to-1) discussion, which gives a lot of leverage to align marketing and sales from an intelligent standpoint. It’s a lot of work, which is why we’ve been able to build a service around it. But once that work is done, people show up for calls more educated and, unsurprisingly, the close rate goes up—because they would have opted out of the funnel if they weren’t a fit. We’ve educated them not to be there, without having to spend expensive time on a 1-to-1 education for somebody who shouldn’t be there in the first place.

You want to establish a bulletproof proposition that is so good that, at the least, people come to the conclusion that even if now isn’t the right time, they know you’re the person they’re going to call when they need that service. You know what the most expensive thing for a sales organization is?

“Send me some information.”

You want to get to the “no” as fast as you can.

At least in our world, the most expensive thing is a block on our calendar. An example of getting closer to a definitive answer after a customer asks for more information would be:

“[customer’s name], I hear what you’re saying and 90% of the people that I send the materials to that you’re asking for never even open them. Are you going to be the person that opens those materials and actually reads them? Because if you’re not, it’s cool, just tell me.”

Almost everybody will then respond with something along the lines of, “I will.”

The interesting thing about one of the top six psychological triggers of sales is consistency: If somebody says they’re going to do something, they want to stay true to their word.

For more information on how you can 10x your close rate, visit us at https://add1zero.co/

Previous Post
How to Explode Your Call-to-Close Ratio in 90 Days
Next Post
Leaders of B2B Episode 55: Making Traditional Industrial Plants Better Through Software, with John Antanies of Envoy Development